The U.K. SETI Research Network (UKSRN) wants to change all of that. They have taken it upon themselves to help governmental agencies develop a plan for the discovery of extraterrestrial life. During the Royal Society’s Summer Science Exhibition on June 1, UKSRN announced its plans to conduct a survey. The purpose of this survey is to see what the public would do upon the discovery of extraterrestrials. They hope to take this information into account as they develop a plan to aid our governments. According to UKSRN, this is the largest survey to date. The survey results will be compiled and taken into consideration in developing an official plan of action. Although there are many questions on the survey, some of them are: If we discover a signal from extraterrestrial intelligence, what would you do? Some people think we should send messages into space even if we don’t receive a message first. What is your opinion? Most of the questions are multiple choice or simple yes or no questions. You can find a link to the survey at the bottom of this article.

Many world citizens believe that we are severely overdue in developing a policy on how to handle the discovery of extraterrestrials. As communities talk more about the possibilities, so do government leaders. In 2017, the Pentagon announced that the Advanced Aerospace Threat Identification Program, a secret office, had spent over five years and $22 million studying U.F.O. reports. And just last year, Senator Harry Reid admitted that he secured the $22 million for the program because he believes U.F.O. sightings are real. According to Senator Reid, “It is no longer just speculation that people see these unidentified flying objects. That’s beyond question. And it has even become more transparent in recent months.”

In February, Peruvian Airports and Commercial Aviation Corporation (CORPAC) released an official statement admitting that multiple pilots had seen two U.F.O.s flying around Jorge Chavez International Airport. The U.F.O.s were caught on radar as well. The official document went on to say that the ground crew of two airplanes, among others, saw two U.F.O.s parked on runway 33, actually on the runway.

In April of this year, the U.S. Navy announced its plan to develop new guidelines for pilots and others to report incidents with U.F.O.s. In the past, it has been taboo to talk about U.F.O.s in the Navy and other branches of the military. At this point in time though, there have been too many sightings by Navy pilots and other personnel to ignore that something is going on.

It is obvious that not only is talking about aliens and U.F.O.s becoming more socially acceptable, but something in our world is changing. It seems as if we may be on the cusp of discovering that life on other planets is indeed a reality. One almost feels as if our governments are starting to prepare us for something big. So I ask again, if you wake up tomorrow to find out that aliens have landed, what would you do? Maybe it’s time to start making a plan. You can get started by taking the SETI survey at https://www.fromafar.world/opinion. 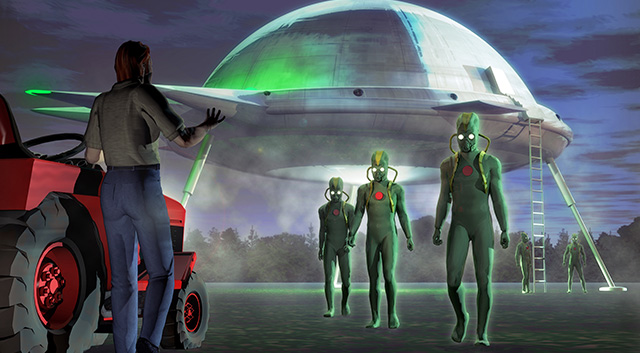 “You and your spouse are en route to your weekend …