Humankind has pondered the stars since we first developed the capabilities of complex thinking. Countless men, women, and children have gazed up at the heavens, wondering if we are alone and if we will ever discover life on other planets in their lifetimes. We may have just gotten a little closer to solving the mystery. An International team of astronomers led by Lisa Kaltenegger, associate professor of astronomy at Cornell University and director of Cornell’s Carl Sagan Institute announced the discovery of a super-Earth just 31 light years away from our own solar system.

The super-Earth was discovered by NASA’s Transiting Exoplanet Survey Satellite (TESS). According to its website, “TESS is an MIT-led NASA mission, an all-sky survey for transiting exoplanets. Transiting planets are those that go in front of the star as seen from the telescope and, to date, is the most successful discovery technique for finding small exoplanets.” “This is exciting, as this is TESS’s first discovery of a nearby super-Earth that could harbor life – TESS is a small, mighty mission with a huge reach,” said Kaltenegger.

The planet, named GJ 357 d, is about six times larger than our own Earth and orbits a dwarf sun in the GJ 357 system. The dwarf sun is about 1/3 the size of our own. “With a thick atmosphere, the planet GJ 357 d could maintain liquid water on its surface like Earth, and we could pick out signs of life with telescopes that will soon be online,” said Kaltenegger.

Researchers first discovered the possibility that a planet existed in the GJ 357 system in February of this year, when a dimming of the dwarf sun’s light occurred every 3.9 days. This dimming in light suggested a transiting planet, which was confirmed after scientists combed two decades worth of records, gathering information and comparing it with the finds of TESS, thus proving the existence of the planet.

The G 357 system is believed to contain three planets, although only GJ 357 d has been directly viewed by TESS. The two other planets are not believed to be suitable for life as we know it. GJ 357 d though, holds tremendous promise of containing life and water. It receives about 40% of the stellar radiation the Earth gets from the sun, placing it in what is called a habitable zone. GJ 357 d orbits around its sun every 55.7 days at a distance of about one-fifth the distance of Earth from its sun. Kaltenegger’s team has built multiple models of what the planet may look like, indicating water and a possible rocky terrain. She said of the planet, “Working on a newly discovered planet is something of a dream come true. I was among the first group of people to model its spectra, and thinking about this still overwhelms me.” Two telescopes are set to begin operating in 2021 and 2015 in hopes that they will reveal more about the planet, its terrain, and possible life forms. 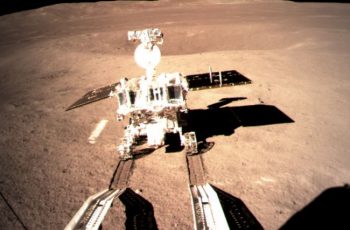 The Chinese government has announced the discovery of a gel-like …