So you’ve been abducted by aliens, now what? Well, if you’d taken out an alien abduction insurance (AAI) policy, you’d be entitled to some cold hard cash. But don’t get so excited just yet, you probably won’t get rich from the payout.

Many companies are now offering AAI. Some are more of a joke than a real policy, just a novelty to tell friends. Others are quite serious and similar to any other insurance policy. The Saint Lawrence Agency in Altamonte Springs, Florida has offered AAI since 1987. For a one time fee of $24.95, enrollees receive a certificate of AAI coverage. If a claim is filed though, the poor unfortunate abductee would receive the whopping payout of $1 over a period of 10 to 20 million years, certainly not enough to break the bank. Obviously, It’s basically just a gag, but some companies offer the real thing. Lloyds of London, one of the most renowned and respected insurance companies, has sold over 20,000 AAI policies.

So why now? Why are all of these AAI policies starting to pop up? Budget Insurance, in the UK, bases their policies off of the latest discoveries by NASA. Just this last month, a new super Earth-like planet was discovered. NASA believes that its conditions are similar enough to the Earth that it just might harbor life. Just a look at the news shows that extraterrestrial life is constantly on our minds as a society, and the discussion is getting serious. Governments across the globe now admit to investigating sightings of UFOs. Politicians are even coming out and admitting that there just might be something to this alien business.

One question remains though. Since thousands of people across the world claim to have been abducted by aliens, but none can provide definitive proof, how exactly is the insurance company to know that one has been abducted by aliens? Well, that’s simple. The Saint Lawrence Agency Just requires your little buddy to put pen to paper and sign a form stating that he abducted you. You then simply send his signature in with your claim. According to the owner of the agency, they’ve already started a payout to one person. So the next time you see something strange in the sky, rest assured that if you took out an AAI policy, you’re covered, if the aliens are willing to sign, that is.

Some folks, skeptics and scoffers, are not going to believe … 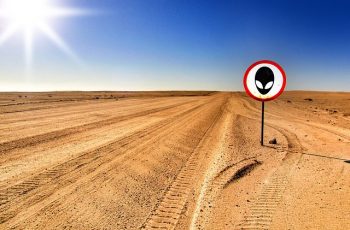 Over a million people plan to storm Area 51 on …